As I announced before, I am collaborating with the Spanish blog Yuanfang Magazine. As they use Spanish, here you have my first article for them translated into English. You can read the Spanish version here. I hope you like it! 🙂

Now I’m in Spain for a while, so I’m not as up-to-date with the day-to-day in Taiwan. That is why I will tell you one of the things that struck me about the style of the Taiwanese girls when I got there.

Before living in Taipei I knew clichés about “Asia” (which sometimes are discussed as if we were talking about the next village) that have turned out not to be true. Each country is different and its people as well.

In Taiwan it is the same. There are differences in weight, hair, eyes, etc.. There are Taiwanese girls with small eyes and some like it but others not so much. One trend among the latter is that they want to have a gaze that makes their eyes seem larger.

And they do not hesitate to use products, techniques or even surgery for it.

Without going into more specific topics about makeup, the most common products used and that are easier to find (even in night markets) are:

– Rounded lenses: to make the iris look larger, have a border around it.
– False eyelashes: here are starting to be used, but not to the level I’ve seen in Taiwan. For girls who have short and sparse eyelashes, false eyelashes thicken the naturals and give depth to the gaze.
That said, I will leave you with some example pictures: 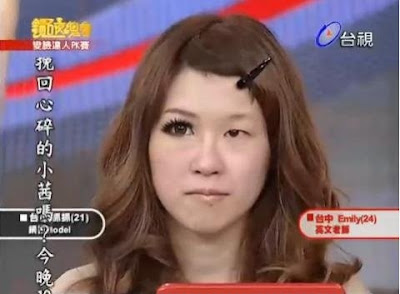 For more information:
Here’s a couple of links with many of the existing rounded lenses and false eyelashes models to give you a little idea of ​​the variety out there:
– Lenses: http://www.koreabigeyes.com/
– Eyelashes: http://maquillarselosojos.com/2013/03/elige-un-modelo-de-pestanas-postizas-segun-tu-estilo/
4 Comments
By Gemma